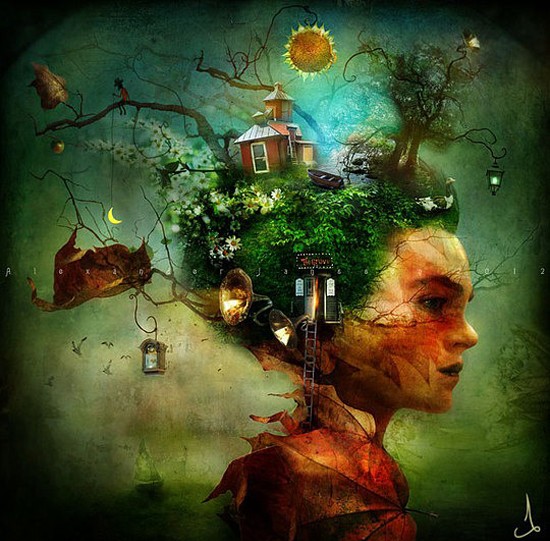 The Lights Did Beckon

Posted by fueledbywhimsy on December 4, 2013 in Stories | Leave a comment

She opened her eyes. She couldn’t help it. Yes, she remembered the warnings; the insistence, the logic and reason and concern behind the inhibiting words. Just one glance, and all would be undone. If her lids spread open, they would never close. And in turn, she would never return. Because she wouldn’t want to. All of this echoed within the walls of her mind, but the echoes grew fainter and fainter, receding back into the hollowness that swallows up all responsible reasoning and task. Temptation swelled and prodded and stoked her, until she could bear it no more.

Her pale, velvety eyelids popped wide open, revealing the vibrant blue of her irises, magnified by the pulsating water. At first all was murky and blurry at the edges. She quailed as a trailing, thin shape appeared beside her, but she quickly recognized it as her hair. Brown and long and swirling in the water, tickling her face and along her bare arms. The next thing that came into focus was the fluttering white of her gown. They had insisted that she wear the most comfortable thing she owned, possibly something that was so light and soft that she wouldn’t even realize she was wearing it. So she has chosen her summer nightie, the one that she had bought too big by accident and had zero hope of ever gaining enough girth to fill out. When she stood, it hung loosely from satin straps on her shoulders, feathering out about her body like it could float away at any moment. And now, suspended in water, it truly looked as though it was trying, except that she anchored it.

Perhaps if she had only observed these two rather unextraordinary things and then had hastily shut her eyes, she might have been all right. No permanent damage would have been done. But, no. She strayed on. Blinking, her eyeballs cool and not smarting at all, she lifted her vision from her eddying, ethereal garment. Tilting her head back, causing her hair to balloon around her face, she looked up at the surface, not five feet above her. The last fretting echo gasped its last in the back of her mind, reminding her not to let her mouth open. If she hadn’t heard it and minded, she might have gasped.

She could see them, the lights. They were on the other side of the surface, bursting and popping and darting about, the flow of the water warping their shape. All sorts of colors, some she could never have imagined existed, exploding for miles in all directions. Their brightness permeated the water, making the depths glow all sorts of shades. On and on it went, as if they were keeping time to a tune only they could hear . . . that only they knew about. It all entranced her. She couldn’t stop staring, her limbs shifting unconsciously in the water, the tube in her arm knocking gently against her wrist. But she didn’t notice. She was unaware of anything other than the lights. Or whatever they were. Whatever was doing that.

It was beautiful; beyond that. It mesmerized her, it beckoned her while warning her to stay where she was, for she simply didn’t know; it stole her. Maybe at one point she had belonged to herself, and to her physical form and mumblings of her brain and tears of the end of rough days. But now that was no more. She now belonged to whatever was up there. A soft joy blossomed inside her, leaching into ever inch of her cells. In a last effort of purpose, she made sure her mouth was tightly sealed as she smiled. And she smiled hard. She beamed as much of her own happiness as she could up at what had given her such bliss.

And maybe they saw it, for they seemed to respond. The flashes increased in speed, as if encouraged. Their color and vibrancy enhanced, as if they were delighted by their effect on her. The bounding, dancing lights skipped across the surface of the water with something like renewed determination. Like they wanted to please her.

Languidly lifting a hand, disturbing both her hair and the tube, she waved at the lights. In reply, they exploded in a flurry of sparks. Laughter tumbled about in her chest, but could not get past her lips. Maybe she’d had a past, a beginning, and maybe she’d meant to have a future. But not anymore. It was all gone. All that was or would ever be was now. The world, the universe, everything that ever had mattered or ever would matter or had the potential to matter existed in the space between her and the spectacle above the water.

She had not listened. She had thought she would be able to, since she had spent so much of her life being a listener and an obeyer. Honestly, she had considered an order like Keep Your Eyes Shut to be very simple and easy. Something that she wouldn’t have to worry about following. But, she had been wrong. She had failed. But this fact did not matter to her.

Contentment and wonder and all things lovely filled her as she floated on her back, so close to the surface and yet so far. Somewhere in her, in the place where things still had meaning and decision, she knew that she would never reach the surface. That there was something preventing her from moving, from propelling herself in any direction. But even this wasn’t a concern to her. She didn’t mind in the least not being able to join the preternatural activity above her. All she wanted to do was watch and feel.

She could vaguely hear cries of alarm and demand, all skating across her eardrum. “Shut your eyes! Shut your eyes!” But if she didn’t focus, they became less and less distinct, until it was as if they weren’t there at all. Smiling up at the wavering lights, she let herself forget about the voices, forget about the tube and her dress and why she was there. Soon, she even forgot about her.